The University of Stirling Archives is delighted to announce the addition of the archives of the Royal Scottish National Hospital to the UNESCO UK Memory of the World Register. Administered by the UK National Commission for UNESCO the UK Register was established in 2010 to highlight documentary heritage which holds cultural significance specific to the UK. Every year a small select group of collections is added to the Register and the RSNH Archive was one of only 11 to receive this accolade as part of the 2013 inscription which was officially announced at a ceremony in Tamworth on Tuesday 9th July. The full list of the 2013 inscription, which includes the Domesday Book, the Churchill Archive and Alfred Hitchcock’s silent films can be found here.

Established in 1862 the RSNH (originally known as the Royal Scottish National Institution) was the foremost hospital providing custodial care for mentally impaired children in Scotland in the 19th and 20th centuries. It gained an international reputation for its enlightened approach to care and treatment attracting patients from England and across the British Empire. The extensive archives of the institution which survive provide a comprehensive record of the management and operation of the hospital. These documents provide a wealth of information about children from all across Scotland who required treatment and care; the lives of their parents and families; and the figures in their local communities who supported their applications. The stories of these children are recorded in the case notes and other hospital records which document their treatment and care. Unsuccessful applications were also retained by the institution resulting in an archive which provides a wider historical picture of the mental health of children across Scotland. The records of the RSNH provide a valuable new resource for the study of the history of medicine and society in Scotland. It is also a hitherto untapped genealogical resource for families all across Scotland and further afield, its records containing the stories of forgotten or hidden members of families who relatives today are keen to (re)discover. 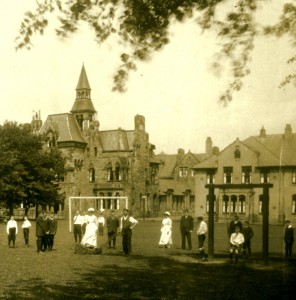 The award provides public recognition for the importance of the RSNH’s archives. NHS Forth Valley Chief Executive Professor Fiona Mackenzie said: “I am delighted to hear that the fine work carried out by the Royal Scottish National Hospital has been considered worthy of recognition by UNESCO. Throughout the nineteenth and twentieth centuries the hospital challenged prejudice and influenced social change. There is no doubt that the hospital was a trailblazer and its legacy is one of care and compassion. Although now demolished, and the site of the new Forth Valley Royal Hospital, its memories live on, and it is still held in affection both by NHS Forth Valley staff and the local community.”

The RSNH archives was part of a larger transfer of historical material from NHS Forth Valley to the University Archives in 2012. This material also included the archives of Stirling District Asylum (Bellsdyke Hospital) which are currently being catalogued and conserved. You can read more about the UNESCO award here.