Musicians Union – what did the branches do?

The vast majority of the Musicians Union collection has now been catalogued and added to our online catalogue. The collection includes material from Central and District offices and also material from over 65 branches of the Musicians Union spread across the whole of the United Kingdom from Aberdeen in the north, to Bournemouth in the south. As you might expect the records tell us much about the administration of the MU, its structure and operation. The campaigns around the use of recorded music, promoting live music as well as defending the terms and conditions of working musicians and supporting them in times of hardship are well documented throughout the branch records. 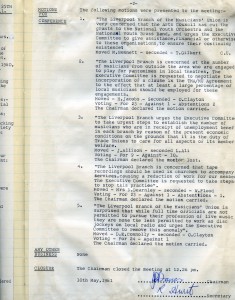 For some branches we have a large number and a wide range of records. For example for Glasgow, Manchester and Liverpool we have records that reflect the size of the union in terms of individual members in those areas and the range of employment opportunities for musicians.

The minutes of committee meetings and correspondence record the concerns of the Union, for example in protecting terms and conditions of employment for musicians employed in local orchestras and in local theatres.  Liverpool minutes  MU/4/5/1/5

We have membership records that provide not only evidence of the size of the branches in terms of recorded members but also provide information which may be of interest to family historians. Membership registers include names, address, date of joining the union, instruments played and if the person had transferred from another branch or moved to another branch.  The membership records cover more than a century of MU membership from 1893 onwards.

It is perhaps not surprising that the MU branches in these large cities produce many records; however some small towns also had very active branches. For example we have records from the Blackpool branch which reflect its history as a popular seaside resort with several theatres and attractions including the Tower Ballroom. The minutes of the Blackpool branch meetings and correspondence record negotiations with the Blackpool Tower Company over the terms and conditions of musicians. MU4/15/3/1

The impact of historical events is also present in branch records for example the Blackburn branch was involved in negotiations with the local council for the Coronation of Queen Elizabeth in 1953 and the use of recorded music. MU/4/11/3/1

The BBC looms large in many branches especially in those branches where members are employed in the BBC orchestras. Much of the correspondence of the Glasgow branch covers negotiations with the BBC over cuts to orchestras and the resulting strikes during the 1980’s. 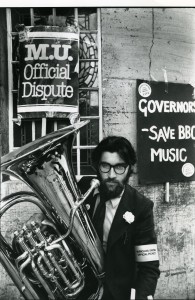