Theories on Down syndrome in the 1930s

This blog is the third from Continuity of Care – the project to catalogue and conserve the records of the Royal Scottish National Hospital. Thanks to a grant from the Wellcome Trust, this project started in the middle of August and will be completed by July 2015.

Although very short the featured letter is of significance to scientific debate of the time. As it is out-going correspondence it is not signed but was written by Dr Robert Durward Clarkson, the Medical Superintendent. It comes from one of the correspondence files. 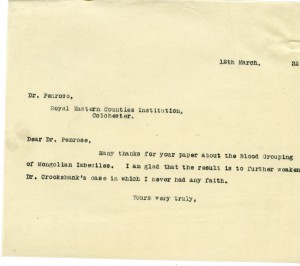 The Dr Crookshank mentioned in the letter was Dr Francis Crookshank, author of ‘The Mongol in our Midst’. This book established the theory that ‘mongoloid’ children were a throw back to an ‘inferior race’. The evidence he provided were examples of physical characteristics shared by ‘Mongolian imbeciles’ and those of the Mongoloid race such as small earlobes and a propensity for sitting cross-legged. These features resulted from the shared distant racial history of the parents and were caused by under-development in the womb.

The book was very popular in its day and the third edition was published in 1931, the year before this letter was written. It is interesting that both Dr Clarkson and his correspondent, Dr Lionel Penrose, clearly rejected the hypothesis.  Indeed Penrose went on to do considerable research on the genetic causes of mental retardation, further discrediting Crookshank’s theory. The paper that Penrose is sharing with Clarkson was ‘The Blood Grouping of Mongolian Imbeciles’ published in The Lancet in February 1932. Unfortunately his covering letter has not survived. A later letter from Penrose to Clarkson in June 1932 thanks Clarkson for allowing him to visit the Royal Scottish National Institution and asks for Clarkson’s help in gathering data on epiloia or tuberous sclerosis.