As we prepare our touring programme for the Hosts & Champions exhibition that will open on the 9th march in Trinity Church, Irvine, Jocelyn Grant, one of our Exhibition Assistants, provides an update on some of the material she has been researching working with the Commonwealth Games Scotland Archive. 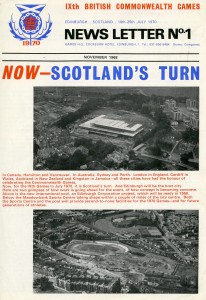 During the 84 year history of the Commonwealth Games, Scotland has now had the honour of hosting this event a total of 3 times. Twice in Edinburgh for the 1970 and 1986 Games, and of course in Glasgow this past year. For 11 days Edinburgh and Glasgow came alive in a flurry of sporting events that engaged and inspired the whole country. However the effect of these Games did not disappear after each closing ceremony, instead each Games has sought to provide a lasting legacy that would continue to encourage and support the surrounding community. In particular each city has often benefited from the addition of new venues.

The 1970 Games is often considered the Commonwealth Games of ‘firsts’. It was the first to use metric measurements, the first to use new technology to provide an electronic photo finish, and the first Games that the Queen attended. However it also produced two purpose-built venues that continued to serve its community during, after, and for the next Edinburgh Games in 1986! These venues are the Royal Commonwealth Pool and Meadowbank Stadium.

At the grand cost of £2.8 million Meadowbank Stadium was built to accommodate athletics, fencing, wrestling and had its own dedicated velodrome.

While this facility was purpose built, the Edinburgh Newsletters in the archive provide an insight into how this stadium was intended to serve its surrounding community after the Games had finished. As the first newsletter released states:

Seen as a ‘Capital Asset’ this centre was refurbished for the 1986 Games and once again played host to a number of sporting events, before continuing to provide a facility for the surrounding sport community. It was this community that launched a petition when threats of closure became imminent (Save Meadowbank Campaign) and helped to ensure that the stadium stayed open. Today it continues to host multiple sporting events such as the Scottish Judo Open, Karate competitions and roller derby (See here for more information about current events).

Costing a totally of £1.6 million at the time, the Royal Commonwealth Pool is now a listed building and has created a lasting impact, with the facility also being used for both the 1970 and 1986 Games. Recently a major refurbishment – costing £37 million – was completed in 2012,  and the pool continues to provide an exceptional facility and venue for events, continuing it long tradition of participating in the Commonwealth Games by hosting the Glasgow 2014 diving competition! Now considered one of Scotland’s key monuments of the post-war period the pool continues to host diving competitions, waterpolo championships and more (the Commonwealth Pool’s events page can be found here).

For the 2014 Commonwealth Games, Glasgow received a number of impressive venues and additions that have now gone on to host or benefit the local community. A particular highlight was the transformation of the exciting venue at Hampden Park.

Hampden Park is well known in Scotland as the home to the national football team and was once the largest stadium in Europe. While this venue is not new, it underwent an impressive transformation for Glasgow 2014 with the playing surface being raised a total of 1.9m to transform the venue from a football stadium to a track and field facility.

This venue has contributed to the Game’s lasting legacy by giving its track to another venue! As part of the Glasgow 2014 iniative to distribute sporting equipment across the country, the track is finding a new home in Grangemouth Stadium and Crownpoint in Glasgow’s East End (more can be read about this story here), adding to the legacy created by the Games that looks to encourage a world-class sporting system.

There were many more venues involved in Glasgow 2014 that are still contributing to the sporting community in Scotland, and will allow the excitement of the Games to continue! If you have any stories of your time playing sports or watching them at these venues, get in touch!

CategoriesNews and events Our collections Uncategorized