During the summer of 2017 Henry Carden, a postgraduate Communications, Media & Culture student, carried out a research placement in the University Archives funded by the Musicians’ Union. Here he writes about his work opening up the family history resources contained within the Musicians’ Union Archive.

As a young-at-heart mature student, I certainly had mixed emotions at discovering that I myself have been archived: 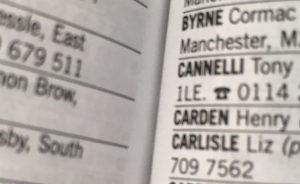 In spite of my ‘illustrious’ musical career, my details in an old branch membership guide were the only mention. So, if my great, great, great grandson is reading this, unfortunately you’ll have to look elsewhere to locate information about my short-lived mid-2000s indie-rock career…

As part of the Musical Roots project, I created a database of over 500 obituaries spanning over a hundred years, from the early days of the Amalgamated Musicians’ Union right up to the relatively recent past. It’s worth noting that quite often, tributes and reports weren’t actually described as obituaries, but they featured the kind of information which you would expect to find in an obituary. It’s also worth mentioning that the inclusion of updates about members (both in life and death) was at the beck and call of Branch Secretaries as this article from The Musicians’ Journal demonstrates: 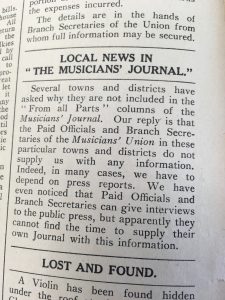 Furthermore, I also included some retirement tributes in the database as they presented a lot of similar information to obituaries. Unfortunately, not all deceased members of the Union received obituaries (understandable given the sheer volume of members) and more often than not, obituaries were reserved for “good union men” who had played active roles in the organisation – and also for more famous members such as John Lennon.

In addition to the obituaries document, I also created databases of photographs and membership cards which are available to consult in the University Archives. The membership cards database doesn’t include the Edinburgh and Glasgow branches as they were too numerous to document, although highlights there included a few familiar names such as Shirley Manson, Gerry Rafferty and Edwyn Collins.

The Musicians’ Union Archive contains a huge amount of historical information on its members and this material is of great interest to people researching their family history.

Whilst some people might have a romantic notion of discovering personal information about one of their musical ancestors, it should be noted that a lot of the resources contained are predominantly administrative. That said, if your relative was an active member of the Union or held an official role, such as Branch Secretary or member of the Executive Committee, for example, then that increases the likelihood of finding more personal information.

Unfortunately, for most members, the only things you’re likely to discover are membership numbers, addresses, the instrument they played and in some cases, their reason for leaving the Union – most likely for falling into arrears with their subscriptions. But don’t let that put you off! You never know what you might discover.

A detailed guide to the family history resources contained in the Musicians’ Union Archive is available here.

CategoriesNews and events Our collections