An Awfully Big Adventure! Books for Boys and Girls 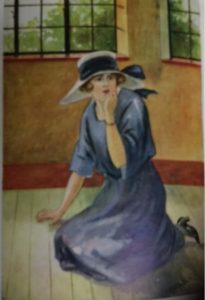 We are delighted to be hosting an exhibition of children’s literature from the Library of Innerpeffray, Perthshire. You can see a selection of 19th century books in the stairwell of the University Library.

The Library of Innerpeffray holds books from the 16th century onwards on a wide variety of topics. The borrowing registers reveal a wealth of information about the people who used the library.

Several of the books on display were borrowed by four sisters between 1898 and 1906. We know that the Haxton family lived at Millearne, near Innerpeffray, and that father David was a coachman. Daughters Mary, Sarah, Christina and Jessie all used the library, with one or both parents accompanying them. The children borrowed regularly. The same book was never borrowed twice, so it seems likely that the children took it in turns to read each other’s books.

James Durward’s borrowed books are also on display. Born in 1868 to the Head Gardener at Millearne House, James borrowed 60 books between the ages of 10 and 15.

Victorian children’s books were designed to appeal separately to boys and girls.  The boys’ books featured tales of adventure and mystery, as well as accounts of famous men.

By contrast, the girls’ books featured ‘suitable’ stories about girls (for example, Louisa M. Alcott’s Little Women) and a series called The Girl’s Own Library.

The Innerpeffray borrowing registers reveal that, despite attempts to direct children to books for their own gender, girls often borrowed the boys’ books.